One of my colleagues at work came up with a clever and funny title for a song called the “450nm Blues” (it is a free download in the New Song section).  I decided to write a song using this as the title and “inspiration” from it.   The title is referring to the solid state devices used in the new solid states lamps and bulbs by many companies.  The “blue” light emitting diodes are combined with special phosphor materials to make white light.  I personally have worked on these designs and even hold several patents in this field.   So you probably can guess where I stand on this from the lyrics.  The “House of Reps” reference refers to a June 5, 2012 vote that “prohibit the government from enforcing federal lightbulb standards that Republicans say are too intrusive.”  See also House Defunds and NEMA.  The last reference comes from NEMA, represent the opinion of some of the largest lamp manufacturers in the world including GE, Osram and Philips.  The three companies, Cree, Osram and Lumileds referenced in the song make a substantial percentage of the world’s bright blue LEDs that are used in the solid state lamps.  I have worked at least one of these companies on developing a new solid state lighting technology using what is called “remote phosphor”.

Some of the lyrics come from old famous blues songs.  These include the songs “Alberta”, “Betty & Dupree” (I once opened for Sonny Terry & Brownie McGhee, the latter singing this song), Cocaine Bill & Morphine Sue, “Shorty George“,  “Bad, Bad, Leroy Brown” (by Jim Croce), “Hoochie Coochie Man“,  “Corinna“, and “Brown’s Ferry Blues” (written by the Delmore Brothers).   Some of the words I put into the mouth of Rush Limbaugh come from me, others from him (his stance on global warming being a hoax is well known).  In any case the song is meant to be fun.  I hope everyone can enjoy it whatever your political persuasion.

Here are the lyrics and credits

(title and inspiration for the song Will Shatford)

Betty and Dupree, he robbed a jewelry store

Cocaine Bill and Morphine Sue, they died in each others arms

Shorty George took all the women and left the men behind

I’m talking about the 450nm Blues

The 450 Blues are the bluest of them all

Cree, Osram, Lumileds, they make them by the millions

Beware of the 450nm blues

Leroy Brown is said to be the baddest man in town

And the Hootchie Coochie Man made the politician frown

But beware of the blues that are bluest blues of all

I’m talking about the 450nm blues

Rush Limbaugh is afraid of them so you better beware

He says they’re too efficient it really isn’t fair

And Mr.Edison’s light bulb it’s got to stay allowed

I know for certain that these blues are really bright

The 450 Blues are the bluest of them all

Cree, Osram, Lumileds they make them by the millions

Stay away from those 450nm blues

I’m talking about those 450nm blues

Update January 26, 2016: Even though the voters of Michigan voted to rescind the “Emergency Manager” law in the 2012 election, the state legislature, with the approval of Governor Snyder immediately replaced it with a new one which they argued had somewhat less draconian provisions.  However, the new law, Public Act 436, is now the center of the controversy in Flint, Michigan.  I am saddened and outraged by the callous disregard for human life that appears to have been perpetrated by the Snyder Administration and the designated emergency manager/s, together with state and local environmental officials, all associated with the poisoned drinking water in Flint.  When I saw a young African American child cry as he learns that he has lead poisoning Detroit Free Press , I broke down in tears.  He faces, along with countless other children and young adults in Flint, grave and long term serious symptoms and conditions too numerous to name.  No song at this time can capture my grief and anger for this calamity.

Governor Snyder have you no shame, no humanity?

I recently wrote and recorded (at home) the song titled ” Benton Harbor Blues”  (nothing like the song with the same title from the Fiery Furnaces). The song (free download  in the “New Songs” section of the site)  is in response to the political calamities they have hit the town of Benton Harbor, Michigan.  The town has been in the media because of a new law passed in the state of Michigan (under a Republican controlled state legislature) which has raised eyebrows across the US.  The law signed into law by Governor Rick Snyder, allows the governor to appoint an “Emergency Manager” who then can do anything he or she sees fit.  The emergency manager can sell assets of the town or city, shut down schools and fire stations, fire or hire people, etc.  The local mayor, commissioners have no decision making power unless it is given to them by the emergency manager.

The town has several valuable assets but perhaps the most valuable is the lake view property which is a park called Jean Klock Park.  Portions of this park were already being used for private development.  However, in recent time there was been a battle (lost) over whether it can be turned into an 18 hole golf course designed by Jack Nicklaus.   In 2011 Emergency manager Josepth “Joe” Harris blocked resident from using the park for walking for part of the day, which appears to violate the charter.  The controversy is outlined in an article in the paper The Michigan Messenger.    Harris also drastically reduced the Fire Department and eventually combined it with the local Police department.   However, what really disturbed me is that when the voters of the state wished to put the controversial law which Governor Snyder can use to “take over” and city, the signatures gathered to have a referendum on this controversial law on the upcoming ballot, all the signatures were thrown out.   Why, because according to the state board of canvassers  (in a 2-2 decision) they font size on the initiative document was “too small”.   As of late June 2012 it is reported in the Detroit Free Press  the status is that the “Michigan Court of Appeals ruled earlier that the petition from Stand up for Democracy to ask voters to repeal the emergency manager law should be put on the Nov. 6 ballot.”  According to the paper another group has appealed this ruling to the State Supreme Court.

The lyric of the song include several made up words and phrase.  One is “Koched Out”.  This is referring to the famous and rich Koch Brothers who are supporters of many right wing politicians.  There is also the phrase “ALEC-Kazamed”.   ALEC is a conservative organization that is behind much of the neo-conservative legislation that is being put into effect in the states (such as the emergency manager law in Michigan).  The word  is a play on the famous magical word Alakazam.  The reference to “Maddow Too” is to  a TV political commentator on MSNBC in the US, Rachel Maddow, who has been one of the few to tell the story I call the “Benton Harbor Blues”.   Here are the lyrics.

That’s why we got the Benton Harbor Blues

That’s right we got the Benton Harbor Blues

Where you got no vote

Cause the town’s been revoked

Or you’ll be singing the Benton Harbor Blues

Knocked Out (alternate “Koched Out”)

And that’s why we got the Benton Harbor Blues

Fire in the Mall

No one to Call

That’s why we have the Benton Harbor Blues

Where you got no vote

Cause the town’s been revoked

You better shine the Governor’s shoes

Or you’ll be singing the Benton Harbor Blues

I asked my friend, Simón Cherpitel, who is a wonderful photographer, if he had any photos of me from the 1960s and during the time I was playing with Hamilton Camp and the other members of the True Brethren.  He came up with a bunch of really wonderful photos starting in 1968 ending in 1970.  The one taken in August of 1970 is the only photo I have found of the original True Brethren.  This photo was taken in Virginia at a place called Skymont, which was community associated with  spiritual group  Subud.  I lived there for several months and built several buildings (all torn down now to make way for a freeway).   In the photo you can see on the left, Raphael Grinage on cello, moving right Hamilton Camp, myself on the Martin 12 string guitar, and Loren Pickford holding the flute in his lap.

Simón is a fantastic photographer who I have known since 1968.   He and I used to perform together where he showed slides of his work in conjunction with my singing and playing original songs.   He even won an award for a best photo in life magazine. You can see his work at http://www.cherpitel.com/. 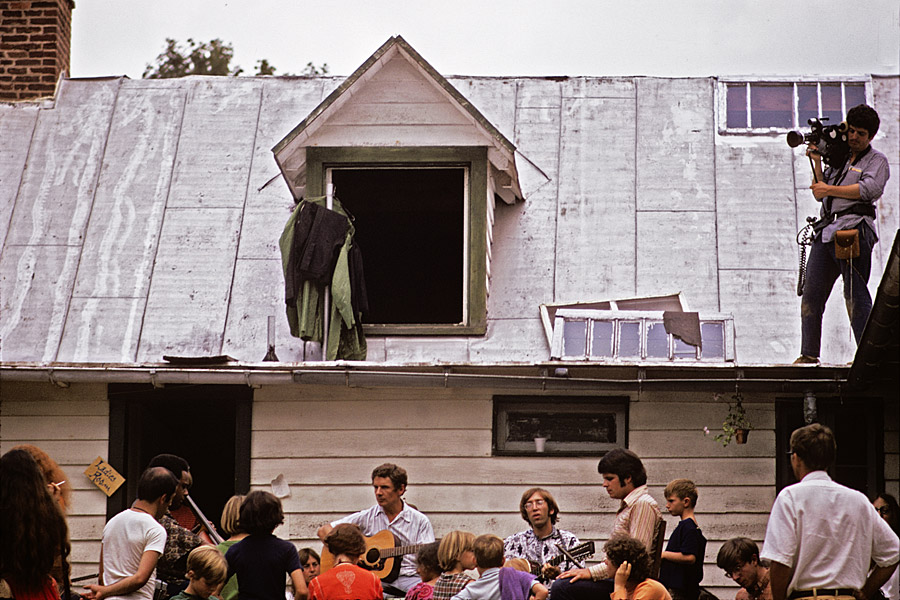