A collection of 11 songs recorded in 1974 by the group Patchwork Triangle. All songs except the song “The Sheaves” were written by Waqidi Falicoff (SESAC).  The words to “The Sheaves” are from the poem of the same name by the poet Edward Arlington Robinson and put to music by Waqidi Falicoff (SESAC). Some of the recordings were done in an EMI Music Studio in London.  The remainder of the songs were recorded on a 4-track Teac Simul-Sync  tape recorder.  The group was supported by Top Topham (electric guitar), “Snow” of Blackburn & Snow (vocals), Laura Bailie (vocals) and Sir Ellis Rich (piano). 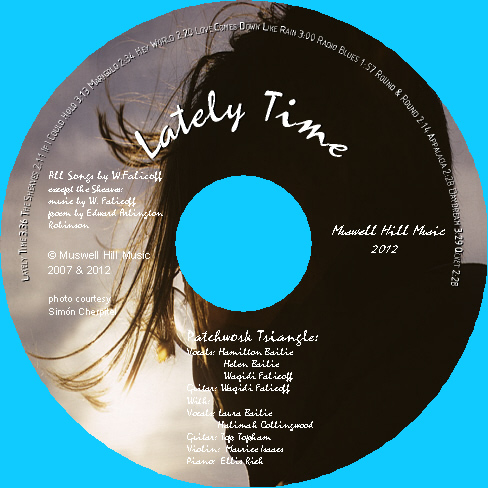 Lately Time Album
This is an album of music performed by the Patchwork Triangle.
Price: $0.00
Download all 11 tracks here for free

All individual tracks are free to listen to online or download